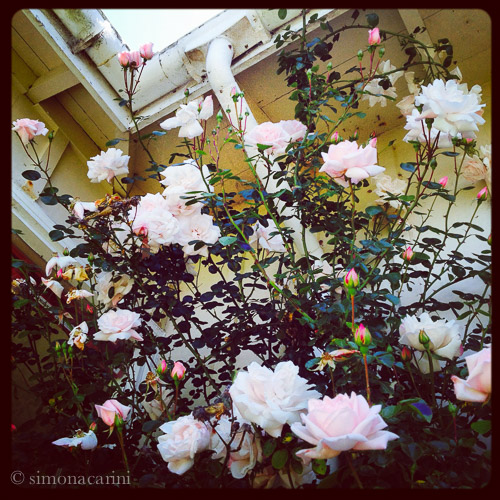 Last year, at the end of the blooming season, I pruned the two rose bushes that grow on the western wall of our house.

Every evening for over a week,
after the day’s work was done,
in the suspended moment between day and night,
I pruned.

The air was still,
the Pacific Ocean, though constantly chattering, seemed to slow down and settle for the night.
Birds were silent,
bunny rabbits were safely tucked deep in the bushes,
raccoons were preparing for their nightly raids,
and I pruned.

Brandishing shears in my gloved hands, I snipped and snipped and pulled long thorny branches tangled with others. I was unravelling a mystery.

I wished the bushes understood my destruction’s purpose was to make them better. But I doubted myself and them. What if I bungled the whole thing and the bushes died as a result of my inexperienced snipping?

The light thump of each branch coming to rest on the growing pile of siblings sounded final, like a chapter-ending period. I left only healthy-looking branches off the main stem. The bushes looked kind of naked, exposed. The while walls behind them glared at me, exposed too.

I carried the last mound of severed branches to the discard pile and went inside without looking back. A sense of having survived a necessary painful process prevailed, liniment on the raw wound. For months, I didn’t go close to the bushes for fear I would see signs of deteriorating health.

Then,
the pale pink bush exploded
into a firework of delicate blooms.

I tried to remember how sparse the bushes had been after my surgical intervention, but it was hard to match my six-month-old memory with the lush growth in front of me:
a lavish
ravishing
rose world,
a world lighted by pink and red petals.

On a recent morning, demoralized about sustained creative efforts not bearing the expected fruit, I went outside and looked at my roses:
bejeweled by dewdrops,
compliments of the nightly coastal fog,
they smiled at the pale morning sun and at me.

And I understood.
I must cut away what saps my energy,
what served a purpose, but whose role has come to an end.

To bloom, I must prune — mercilessly.